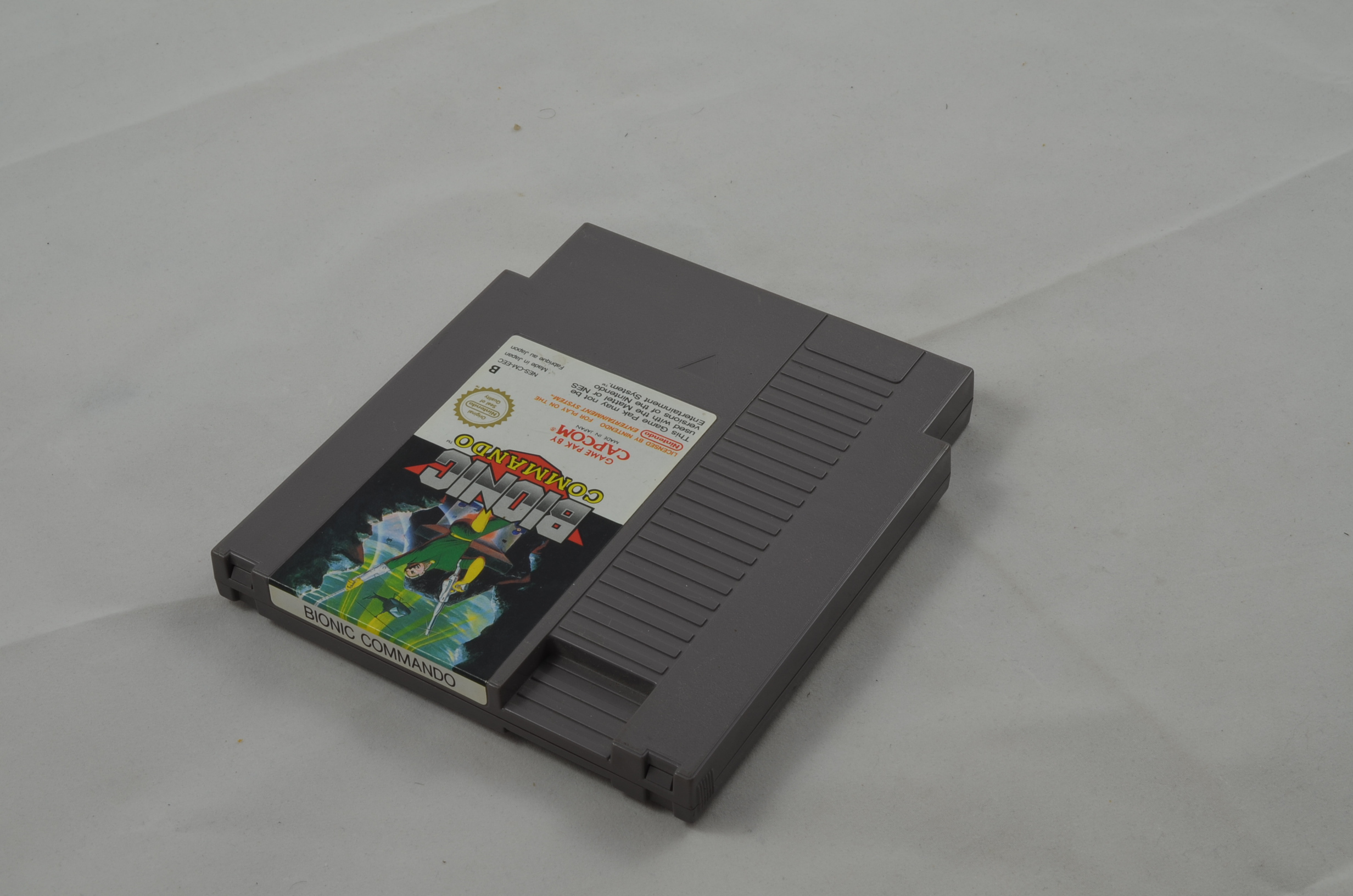 Bionic Commando, originally released as Hitler's Revival: Top Secret in Japan, is an action-platformer video game released by Capcom for the Family Computer and Nintendo Entertainment System in 1988. It is based on the 1987 arcade game of the same title.

As Ladd Spencer, a member of the FF Battalion, the player has to explore each stage and obtain the necessary equipment to progress. Ladd is equipped with a mechanical arm featuring a grappling gun, allowing him to pull himself forward or swing from the ceiling. As such, the series is one of few instances of a platform game in which the player cannot jump. To cross gaps or climb ledges, Ladd must use his bionic arm.

Bionic Commando is a platforming video game in which the player controls Ladd Spencer, whose mission is to rescue Super Joe and to uncover the mystery behind the Albatros project. Players navigate through the game via an overworld map, which they can move from one numbered area to another in a nonlinear fashion. Starting at Area 0, players can move Ladd's helicopter to any connected area on the map. However, once Ladd's helicopter starts to move, the enemy ground vehicles will also move. Once the helicopter reaches its destination without crossing over the path of an enemy vehicle, the player can choose to "descend" and play that area or to "transfer" to a different area. However, if the helicopter intercepts with an enemy vehicle, then Ladd must engage the enemy in an overhead perspective. In this perspective, players use the directional pad to navigate Ladd through the scene, and they can use the buttons to shoot down the enemy. One of the enemies will drop an Eagle-shaped mark when killed, which players can collect for an extra continue.

When Ladd descends into an area, players are taken to a "Weapon Selection" screen, which they must choose one weapon, protective piece of equipment, special weapon, and communication device to use. After selecting the equipment, Ladd is then dropped into the area, which the 2D platforming gameplay begins. Players use the control pad to move Ladd left and right, and the buttons to fire at enemies. In the platforming mode, Ladd is unable to jump, so players must use his bionic arm to navigate platforms and obstacles. Players can extend his bionic arm overhead, directly in front, and above at a 45-degree angle. The bionic arm is used to climb up to higher platforms, swing across chasms, and pick up some items. Planning out moves and timing is necessary to complete areas. There are two types of areas in the game - "combat areas" in which players must fight through and "neutral areas" in which additional information and items may be collected. If Ladd fires his weapon in any neutral area, an alarm sounds, and other combatants will start fighting.

In the combat areas, Ladd must first find the communications room, which Ladd can use to communicate with comrades and to "wire-tap" and listen in on enemy conversations - gathering important information in the process. After using the communications room, a door to the remainder of the area will open. At this point, the player may need to access another communication room to gain further access, depending on the area. At the end of the area is a room that contains a mechanical core guarded by a boss; the player must get past the boss in order to destroy the core, clearing the area. At the end of each area, Ladd obtains additional items or weapons as a bonus, some of which are necessary to access different areas. Additional weapons include wider-range guns, 3-way guns, bazookas, and Super Joe's machine gun. Other items include the flare bomb to illuminate dark caves, medicine to restore energy, permits to access certain areas, protective gear that repels enemy bullets, extra communicators, bullets that help extend energy, and 1-ups. Players may need certain items and equipment to access new areas, which may require going back to previous areas to get them. (Quelle: Wikipedia)