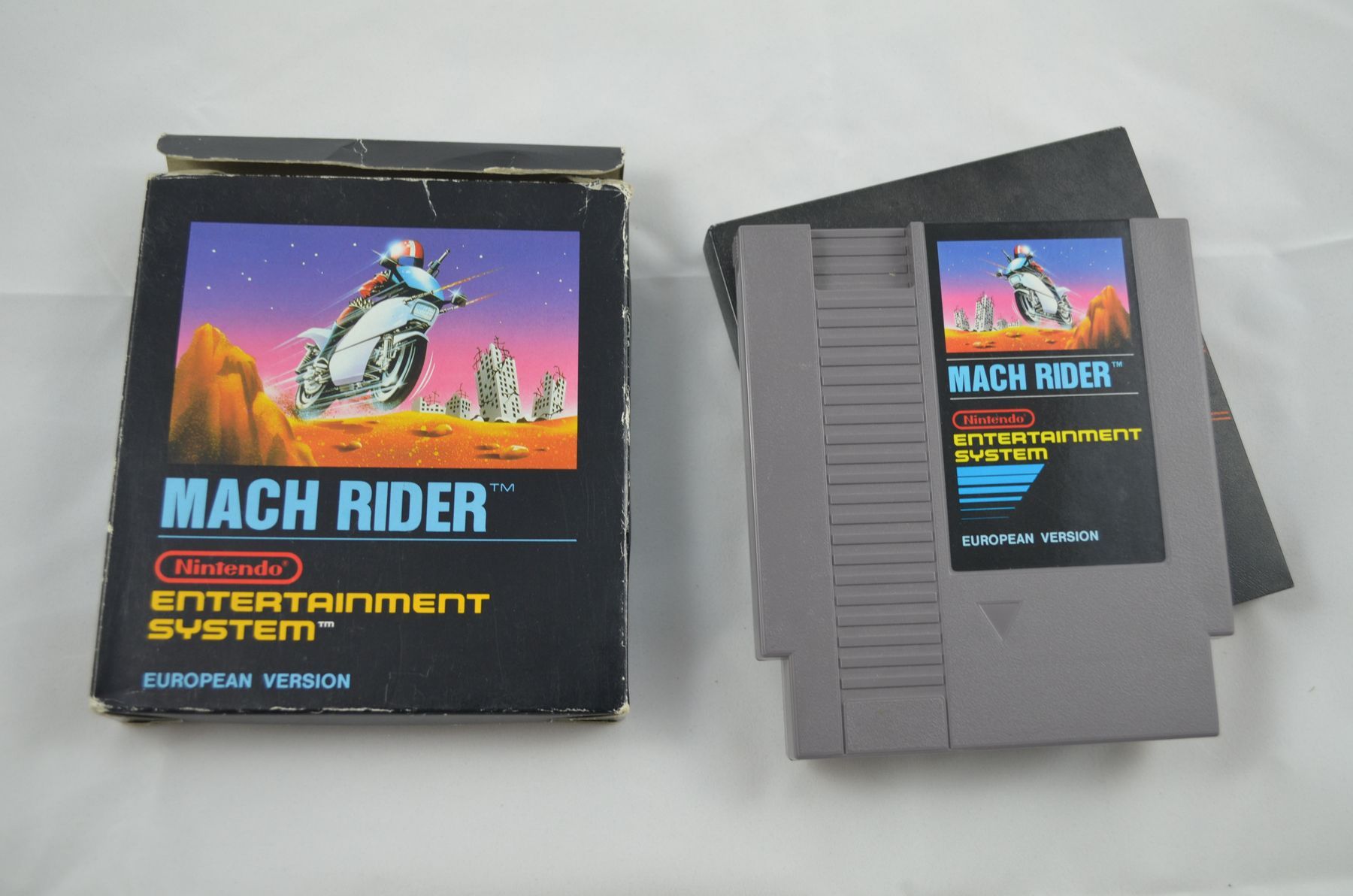 Mach Rider is a futuristic driving video game created by Nintendo. It was first released on November 21, 1985 for the Famicom in Japan. A year later the title was released in North America. On March 15, 1987 it was released in Europe and Australia. The Famicom version can use the Famicom Data Recorder to save custom tracks.

It was released on the Virtual Console for the Wii (2007), Nintendo 3DS (2013) and Wii U (2014). While the feature was only available in the Famicom version in the original releases, all versions of the Virtual Console release except for the 3DS version can save custom tracks.

The game's controls are somewhat more complex than other games at its time and require some extra skills. The left and right directions on the Control Pad steer Mach Rider and the A button accelerates. The B button fires Mach Rider's machine gun which can be used to destroy enemies and obstacles on the road. The up and down buttons are used to shift gears. Mach Rider's bike has four speed and travels at an immense speed in third and fourth gear.

In each round, points can be scored by destroying enemies and certain obstacles with the machine gun. The number of points scored for destroying enemies and obstacles are determined by the power of the enemy destroyed and the type of obstacle destroyed. If the player "blocks" an attacking enemy by ramming it against a hazard on the track, they obtain more points, and this also replenishes Mach Rider's bullets.

Fighting Course: The Fighting Course consists of the primary story sequence. The player controls Mach Rider as he travels across ten different sectors, and tries to avoid being destroyed by obstacles such as Oil Drums and his enemies, the Quadrunners. If the Rider is destroyed, he will separate into fragments and then reform, as long as he has energy (lives from the second sector on) remaining. Much like other games of the time, such as Ice Climber and Balloon Fight, there is no ending sequence. Once the tenth sector is completed, the story starts anew, with a second quest of ten entirely new sectors. After the twentieth sector is done, then the story starts again, but with the original scenarios. On each sector in Fighting mode, the player is given the choice to ride to the next sector on either Track A or Track B. The two tracks are different from one another and with each new sector there are new tracks.

Endurance Course: The player must race a certain number of kilometres within a time limit while enemies and obstacles get in the way and slow down the progress. Lives and energy are not a factor in Endurance, but being destroyed causes a loss of precious time.

Solo Course: This is the same as Endurance Course, but with no enemies.

Design Mode: This is where the player may design their own sector and then race on it using one any of the three other modes of play. However, like Excitebike, the original game required the Famicom Data Recorder in order to save the tracks, and the device was never released outside Japan. The 2007, and 2014 Virtual Console versions of the game allows the user to save the tracks onto the system memory (Wii and Wii U) but has had the feature removed entirely on the 3ds version. (Quelle: Wikipedia)