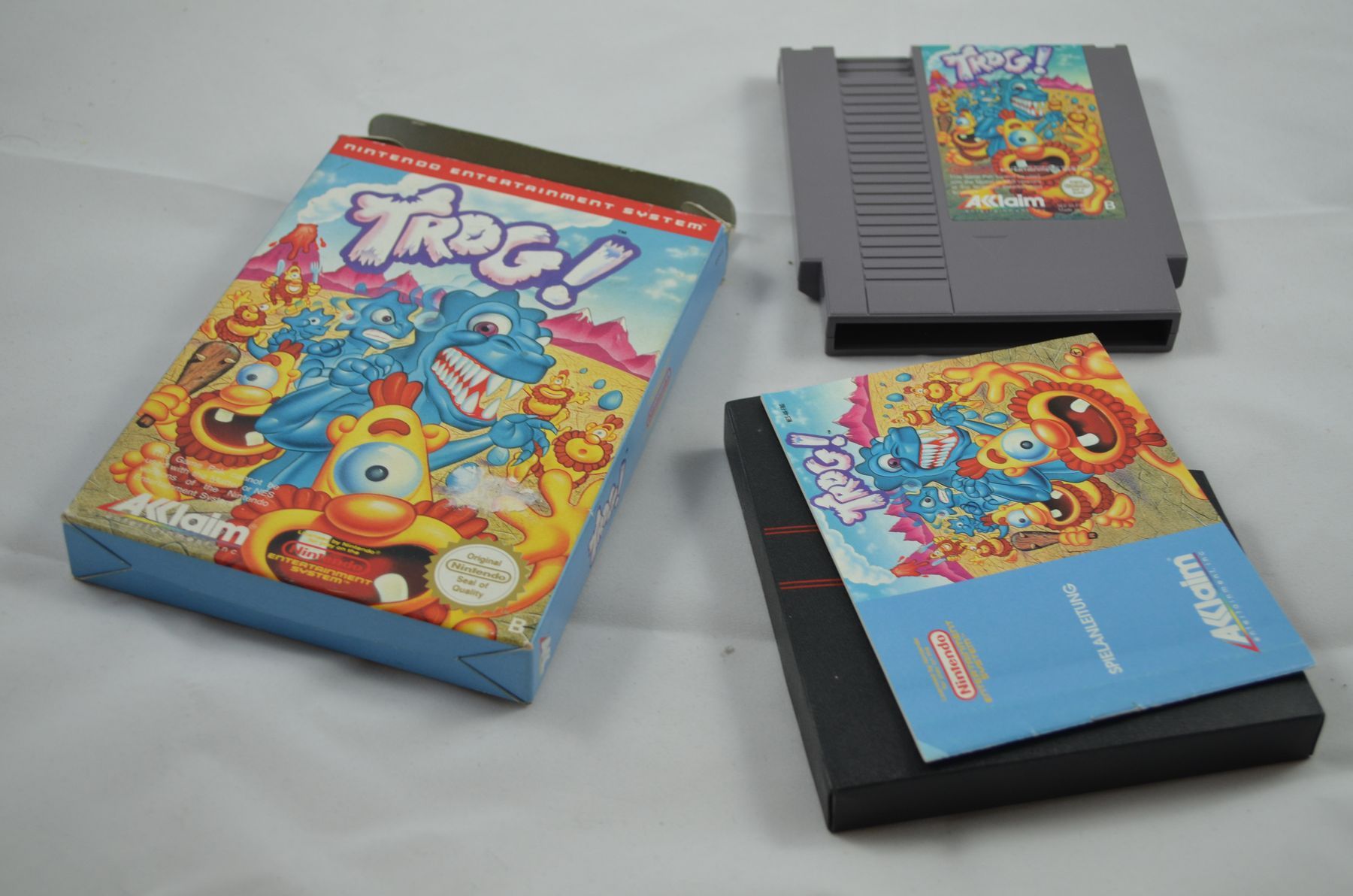 Trog is an arcade game developed by Midway Games and released in 1990. In the game, players control one of four dinosaurs and must collect eggs onscreen while being pursued by cavemen called "trog" (named after the word troglodyte) The game supports up to four players at once.

Trog features claymation graphics, advertised as "Playmation" by Midway. Creating the claymation graphics comprised a significant portion of the game's development costs. Originally, the game involved indirectly controlling the dinosaurs by leading them around using bones, but after early versions of the game tested poorly, the gameplay was tweaked to make it more similar to Pac-Man.

Ports of the game for the Nintendo Entertainment System and DOS were released by Acclaim Entertainment in 1991. These versions reduce the number of simultaneous players to two.

The player assumes the role of Rex, Bloop, Spike, or Gwen, small Theropod-like dinosaurs (with Styracosaurus-like heads) in the land of "Og", home to the one-eyed cavemen known as the "Trog". In the NES rendition of the game, only Bloop and Spike are playable.

Players must pick up all colored eggs lying around the map as the Trog cavemen wander around, attempting to eat them. Unlike its influential predecessor, Pac-Man, the dinos can attack at any time with a punch that does not require a power-up. Power-ups also randomly spawn to help finish the level; these include red flowers that increase the player's speed, ice cubes that freeze all on-screen Trogs and pineapples, which turn the character into a full-grown T-Rex that can temporarily eat his enemies (similar to Pac-Man's Power pellets, except the power occurs on random), and a firebrand which bestows a temporary fire breathing ability on the dinosaur. The multiplayer mode consists of two to four dinos on the same screen competing to get all of his/her same-colored eggs first, and players can either attack or protect each other (though power-ups indiscriminately hurt anyone that's in the way regardless). Many stages feature no walls, so characters can travel off the edge of the grid-like islands and plunge into the sea if they're not careful. The Trogs themselves are subject to all hazards the player is; they can even be taken out by their own wheels, fire and pits to comic effect. The Trogs can be one-hit punched, to the side of the head, as they approach the screen edge resulting in them falling into the sea, with bonus points rewarded to the player.

There are three different levels of difficulty: Easy, Advanced and Expert (Although the Arcade operator can set the difficulty in the operator menu to make the game more difficult on easier levels, without the player's knowledge of the true global difficulty.). Advanced Mode rewards a 200,000 level bonus and Expert rewards a 400,000 level bonus. As the levels progress, the cavemen become smarter and invent new ways to capture the dinosaurs. They eventually create fire pits and wheels to burn and flatten, respectively, the character and springs to bounce themselves all over the screen. Catapults and transportation chambers in latter stages help evade these attacks, however these are also usable by the Trogs resulting in some tactical gameplay options. (Quelle: Wikipedia)