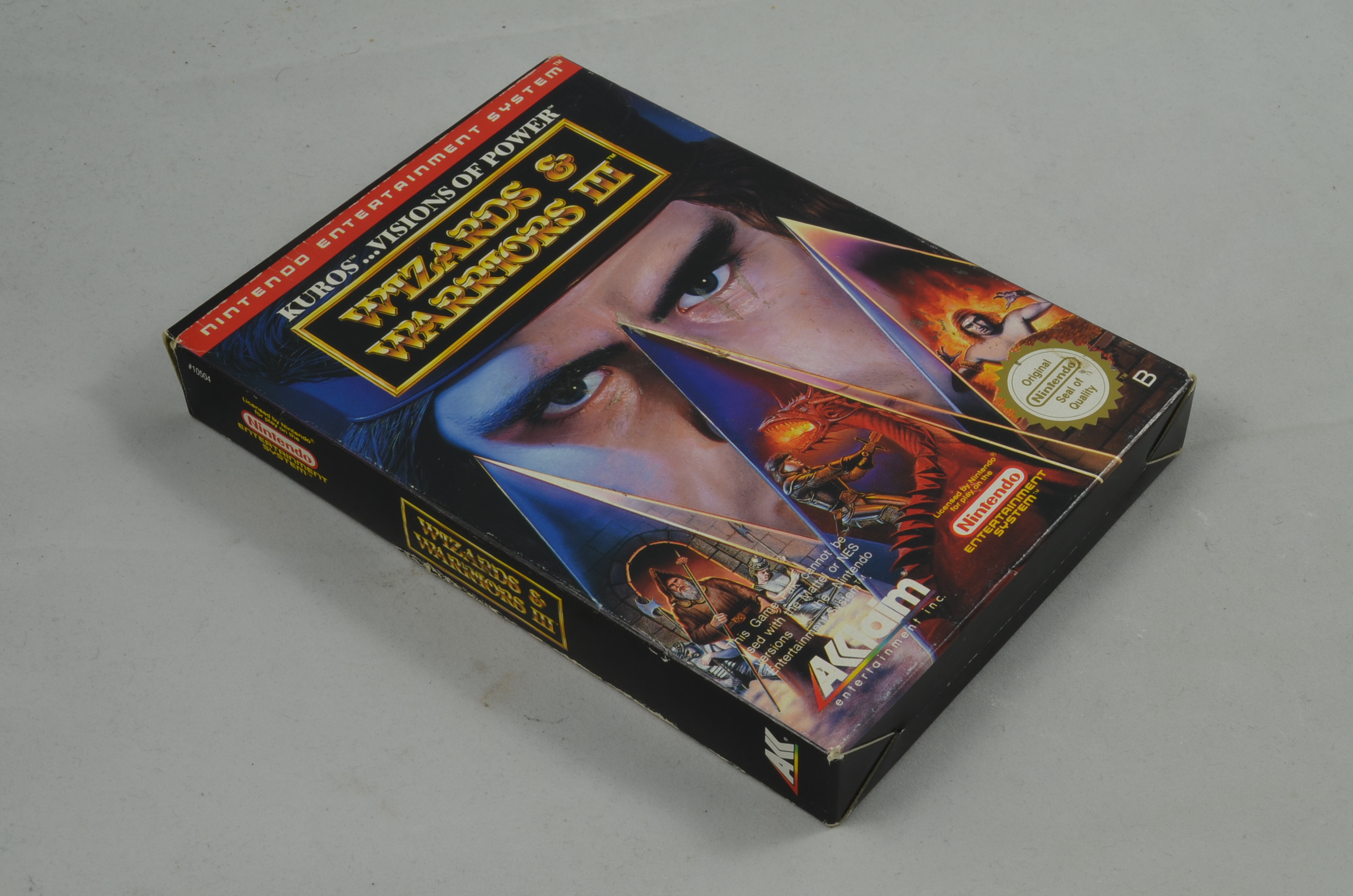 Wizards & Warriors III: Kuros: Visions of Power is a platforming and adventure video game for the Nintendo Entertainment System (NES). It was developed by UK-based company Zippo Games for Rare; it was published by Acclaim and released in North America in March 1992 and in Europe on January 21, 1993. It is the third and final installment in the Wizards & Warriors series and is the sequel to the 1989 title Ironsword: Wizards & Warriors II. The game picks up immediately from the events at the end of Ironsword where the knight warrior Kuros had just defeated the evil wizard Malkil from the peak of IceFire Mountain. Unaware that Malkil's spirit is still intact, Kuros gets struck by a bolt of magic from the spirit, causing him to lose his armor, memory, and honor. Malkil then flees to the city of Piedup and seizes the throne from Good King James. Meanwhile, Kuros, after wandering for months in the wilderness without weapons, armor, or food, arrives at the city of Piedup, where he must build strength and utilize various disguises and abilities in order to take on Malkil. The game is nonlinear and requires players to explore various areas to pick up items and gain abilities to unlock different parts of the city in order to progress.

Wizards & Warriors III was developed by Zippo Games' founders Ste and John Pickford, who also had a few additional programmers and artists to assist them. The Pickford brothers designed the game as a homage to Ultimate Play the Game's (Rare's former incarnation) 1983 ZX Spectrum title Atic Atac; they also drew inspiration for gameplay and art from other NES titles such as Metroid, Faxanadu, and Super Mario Bros. 3. The game had moderate sales, though not as good as its predecessor Ironsword. It was praised for its bold graphics, expansive gameplay, and challenge. However, it was mostly criticized for its controls, lack of fighting, and the lack of continues or passwords. While the game received mixed reviews, Ste Pickford said that this game was his personal favorite. Zippo Games, which was acquired by Rare and was known as Rare Manchester during development, shut down shortly before this game's completion, and while the game hinted at another sequel, it has never occurred.

Wizards & Warriors III is a platforming video game which features open-ended gameplay elements similar to games such as Metroid and Faxanadu. Players control the main character Kuros as he sets out to defeat Malkil and free the town of Piedup. The game features three separate realms in which the player must explore - the town, the underworld, and the palace; players can freely navigate from one realm to another. Throughout the game, players find money which can be used to buy items from inns located throughout Piedup; players can buy keys for unlocking doors, food and drink for restoring health, and information from shopkeepers. Players begin the game with three lives, and the game ends when all lives have been lost; unlike the previous Wizards & Warriors games, there is no password or continue feature.

Kuros' first objective is to gain new disguises, powers, and abilities from the three main character classes: knight, thief, and wizard. In order to do that, Kuros must first collect bronze, silver, and gold statues of each character class and return each statue to its corresponding "guild". Upon returning a statue to a guild, Kuros must pass a test - in the form of a horizontal or vertical-scrolling level with a boss to defeat at the end - from the person who runs the guild. After defeating the boss, Kuros is then outfitted with a new attire and ability. Each character class has three levels, and each corresponds to a specific statue which must be returned to a specific guild. For example, if Kuros find the bronze thief statue, he must return it to the first level of the thief's guild; if Kuros passes the test, he then receives the disguise and ability of a "level one thief". At the levels of the guild increase, the more difficult the tests become. Each new ability allows players to access new areas which would normally be unreachable with other character classes and abilities. New abilities include improved weaponry for the knight, greater magic for the wizard, and increased access to buildings through doors and windows for the thief.

Another objective to finding and defeating Malkil in Wizards & Warriors III is to find four secret gems which will unlock the hidden passage through the town of Piedup to the castle's throne room where the evil wizard is located. To do this, Kuros must rescue King James' three princesses who are hidden somewhere in Piedup; each of them will grant Kuros a gem and agree to marry him when rescued. The final gem is obtained by defeating a dragon in the town's underworld. (Quelle: Wikipedia)